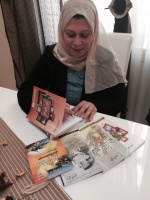 
A palestinian child trial turned to a comic sketch and the crowd laughed when his lawyer "Leal Tsiml" got a balloon out of her purse and gave it to the 12.5 year old Al hasan, to play with it during the trial, which made the judge hide his face behind a computer screen in front of him
Mockery of the trial increased when the judge Asked Fadel Almuhtaseb, father of the child , to pay fine of 5000 shekel, then reduced it to 2000 shekel, but the father refused to pay
In the name of which law would you rule this judgment and prosecute a child?.. I will not pay the fine.. the father said to the judge
My child walked and attended the trial with his hand and feet cuffed, he was frightened and scared of the soldiers surrounded him
It is ironic that the judge will extend the detention of Al Hasan until sunday, until filing an indictment against him
They brought him to court without an indictment, and the judge asked me to pay 2000 shekel fine, it is the law of Israel occupation
*********

Two brothers were detained by Israeli forces in Hebron and taken to the Ofer detention center on Sunday, for allegedly throwing stones at Israeli forces. One brother was released from Israeli custody, while the other will stand before an Israeli military tribunal, the father said
Fadel Al-Muhtaseb, father said "a number of Israeli forces detained my children Al-Hassan, 12 and Al-Amir, 7, while they were on Ash-Shalala Street in Hebron. Al-Amir was released ten hours after his detention."
Al-Muhtaseb said he was informed of his children's detention by residents, who said they were taken to an unknown location. When he returned home, he found Al-Amir standing outside the front door
"I received a phone call from one of the detainees in Ofer prison who told me Al-Hassan was there and he will be put before an Israeli military court on charges for throwing stones at Israeli soldiers," the father said
Al-Muhtaseb called on the children rights and international organizations to defend the interest of children and to work on releasing his child from Israeli custody
An Israeli military spokesman said the army was not familiar with the detention of two children in Hebron

this is a funny scene
and nasty
but, is that any justice in Israel
thank you


it is the law of Israel occupation "

غادة البشاري كتب:this is a funny scene
and nasty
but, is that any justice in Israel
thank you

Israel is too far from being a state of justice
Israel is a state of terrorism
The palestinians are trying to free themselves by resisting the occupation while westren media keeps lying and twisting the facts showing and presenting the resistence as terrorism while the massive killing ,destruction , and occupation all are self defense
Thanks for your comment, its a great honor


it is the law of Israel occupation "

Thank you my dear